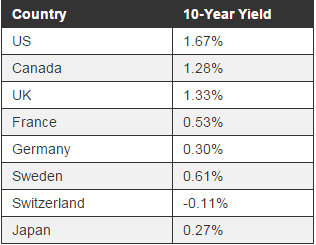 Well it was about 618 days ago when Ben Bernanke suggested the Federal Reserve would soon taper asset purchases, sending 10yr yields skyrocketing from 2.04% to 3.00% over the next 4 1/2 months. Now here we are, three months after the Fed completely ended asset buying and the 10yr stands at 1.67%. Did you know that the low on the 10yr for all of 2013 was 1.63%? So if the Fed isn’t buying Treasuries, then who is?

The quick answer is well, everyone. Stocks aren’t very attractive, home prices have started to level off and real yields on foreign bonds are becoming negative. Just a quick refresher, real yields are yields minus inflation. To give a sense as to where yields in the US compare to the rest of the world, take a look at the graphic.

So there is no surprise buyers are scooping of US Treasuries. A lot of the buying of US Treasuries is coming from indirect bidders which includes foreign central banks among others. Yesterday they bought 56 percent of the 10yr auction versus the usual 47 percent. They also bought 63 percent of the 5yr auction versus the average of 52 percent. With the help of lower inflation expectations, more foreign money is moving into US bonds. The only threat to bond yields is inflation and oil has become synonymous with inflation. The drop in oil prices has started to level off, and by level off I mean the price of a barrel of oil only dropped 8 dollars in January. See graph below. If prices continue to drop I would expect yields on bonds to drop as well. But how much lower can oil really go?

Back to the 10yr, there appears to be some resistance in the mid 1.60’s and there should be some heavier resistance at 1.55%. If yields could push lower than that is anyone’s guess but the wave of momentum certainly isn’t slowing down. On the flip side, the Fed has continued to reiterate that they expect to raise rates in June. Is anyone listening?