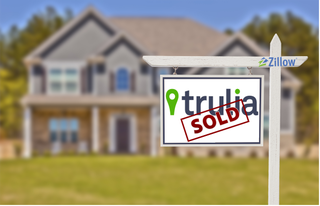 I advertise on both Zillow and Trulia and both have helped build my business. So, I've been quite curious as to how this acquisition may play out. I've already seen some changes to the agent websites and services from Trulia and not necessarily changes I like. Or that help me anyway. All this reminds me of my previous life in the tech industry where rarely did one plus one add up to two. Or even one and a half.

Zillow’s blockbuster $1.8 billion acquisition of Trulia is set to close later today — creating a dominant player in the online real estate arena with combined traffic of 130 million monthly visitors and more than 2,000 employees. A conference call is scheduled for 6 a.m. Wednesday, and the Federal Trade Commission has already granted its approval.

The all-stock deal first announced last July — and valued at $3.5 billion at the time — does not come without risk. And Zillow laid out the potential roadblocks in its annual report released this morning.

One of the biggest concerns facing Zillow is whether it can properly integrate its long-time rival.

Trulia is a large and complex publicly-traded company, with more than 1,100 employees, 125 multiple listing services partners and monthly visitors that top 55 million.

Competently digesting San Francisco-based Trulia — which will operate as an independent brand — will not be an easy task. The integration may take longer that anticipated, and some key Trulia staffers may leave during the process. The deal also may serve as a distraction to Zillow’s historic growth.

“We may never realize these business opportunities and growth prospects,” Zillow wrote in today’s annual report. “Further, our management might have its attention diverted while trying to integrate operations and corporate and administrative infrastructures.”

If we are unable to successfully or timely integrate the operations of Trulia’s business with our business, we may incur unanticipated liabilities and be unable to realize the revenue growth, synergies and other anticipated benefits resulting from the proposed transaction, and our business, results of operations and financial condition could be adversely affected.

Acquisitions of this size have been known to derail the acquiring company, disrupting the culture and sending the merged entity into a tailspin. (Remember the outcome of AOL-Time Warner).

n other words, they are a big risk.

In fact, the cultural aspects of this acquisition are particular acute. After all, historically, Trulia and Zillow have not really liked one another, battling in the courts and the press.

At the time that the acquisition was announced, Rascoff described the rivalry as a friendly one in which both companies had mutual respect for one another.

“It never has been personal,” said Rascoff of the rivalry. “It has always been business, I guess is the way I describe it. Maybe it is the Seattle Seahawks and the San Francisco 49ers. There is certainly a rivalry there, but it is not a hatred. We both are in this game, and we are both very successful, and we can compete on the field but still respect one another off the field.”

Two separate corporate cultures can exist in parallel, though it is rare. For example, Zappos runs autonomously from parent company Amazon.com, embracing transparency and community, values that aren’t typically associated with Amazon.

Given the overlap between the Zillow and Trulia business — they essentially offer the same services and target the same customers — a strong unified corporate culture will need to emerge.

Will that happen? And how does it affect the Beach Cities Real Estate market in Redondo Beach, Hermosa Beach, and Manhattan Beach CA?