I advertise on both Zillow and Trulia and both have helped build my business. So, I've been quite curious as to how this acquisition may play out. I've already seen some changes to the agent websites and services from Trulia and not necessarily changes I like. Or that help me anyway. All this reminds me of my previous life in the tech industry where rarely did one plus one add up to two. Or even one and a half. Zillow’s blockbuster $1.8 billion acquisition of Trulia is set to close later today — creating a dominant player in the online real estate arena with combined traffic of 130 million monthly visitors and more than 2,000 employees. A conference call is scheduled for 6 a.m. Wednesday, and the Federal Trade Commission has already granted its approval. The all-stock deal first announced last July — and valued at $3.5 billion at the... Read more →

Homeowners elect to do short sales as one alternative to forelcosure. Home buyers buy short sales in the hope of getting a better price than they might on a standard equity sale. Buying a short sale is usually a protracted and inconvenient way of acquiring distressed real estatebut can be worthwhile and attractive in certain instances. As the flow of bank owned foreclosures has eased up, increasingly Redondo Beach home buyers are looking to short sales as a way to acquire a property at a discount to current market value. In theory, it would be nice if short sale buyers were consistently rewarded for the wait and inconvenience they invariably go through. If you are not familiar with the short sale process, what we are specifically talking about is a real estate transaction wherein the seller lists and sells the home for less than is owed on the mortgage. Realistically,... Read more → 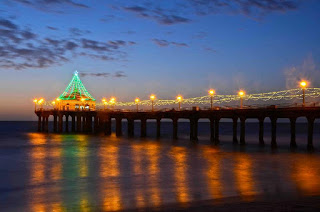 The number of homes sold in Southern California rose modestly last month from both October and a year earlier as investors and first-time buyers targeted homes priced below $400,000. Sales above $500,000 fell nearly 16 %from a year earlier amid a troubled market for larger home loans, a real estate information service reported. A total of 16,884 new and resale houses and condos sold in Los Angeles, Riverside, San Diego, Ventura, San Bernardino and Orange counties in November. That was up 0.3 %from 16,829 in October and up 4.2 %from 16,208 in November 2010, according to San Diego-based DataQuick. While November sales of existing (not new) houses and condos combined rose 5.8% from a year earlier, sales of newly built homes fell 15.2% to the lowest level on record for a November. "'Tis still the season to go bargain hunting -- or at least that's what the November home sales... Read more →

In case you haven't heard, lawmakers have voted to restore loan limits for the Federal Housing Administration to pre-Oct. 1 levels, but the reprieve won't apply to Fannie Mae and Fannie Mac. House and Senate leaders signed off on a conference report for a "minibus" appropriations bill that included language restoring FHA's ability to insure loans of up to $729,750 in high cost markets through 2013. Because the minibus appropriations package also contains a continuing resolution to avoid a government shutdown and continue federal operations until Dec. 16 -- or until Congress completes nine remaining appropriations bills -- lawmakers didn't dally in approving it. The House approved the bill today in a 298-121 vote, and it sailed through the Senate 70-30. So, while this is good news for both home buyers and sellers in the South Bay and Westside, it really doesn't make any sense. Didn't we learn anything from... Read more →

HAMP, HARP, and HAFA. The big three of failed programs - at least so far. Today, it was announced that the government would be expanding the HARP program to include more underwater borrowers. The problem is that as currently construed only loans currently guaranteed by Fannie and Freddy will qualify. Whoops. That eliminates most of the higher dollar amount, interest only or neg am, NINJA product sold in CA (except for maybe the Inland Empire and does anyone there really want to refi anyway?). A randomly check of a few dozen properties and guess what, none qualify. HARP fails to address the major issue for upside down borrowers: they owe more than the house is worth. Will borrowers refi properties that will never be worth what they owe just to save a few hindred dollars a month when a strategic default or short sale makes more sense? That remains to... Read more →

WHAT YOU NEED TO KNOW ABOUT UPCOMING CHANGES TO FHA LOANS As you may know, unless Congress extends the expiration deadline, Federal Housing Administration (FHA) loan limits set in 2008 will drop significantly beginning October 1. Congress raised the loan limit amount in response to the housing crisis to help spur the homebuying market. FHA loans offer borrowers very competitive rates and terms, and they only require a 3.5% down payment. Allowable debt ratios are higher than the typical debt-ratio limits imposed for conventional loans, and there are no income limit qualifications, so more people can qualify for them. If the loan limit drops on October 1, many California homebuyers will face higher down payments, higher mortgage rates and stricter loan qualification requirements. Borrowers seeking larger mortgages will have to apply for conventional loans or jumbo loans, which may be subject to higher interest rates and down payments. Here are... Read more →

Today’s release of Case-Shiller reported that the non-seasonally adjusted Composite-10 price index declined 0.62% since February while the Composite-20 index declined 0.77% over the same period falling to the lowest level seen since the Great Housing Collapse commenced in 2006 further indicating that housing is continuing slump into a double-dip. The latest CSI data clearly indicates that the price trends are continuing to slump and the more timely and less distorted Radar Logic RPX data is continuing to capture notable price weakness nationwide. While some of this data has no relationship to local Los Angeles markets, psychologically it weights heavily on both buyers and sellers. Further, both composite indices are now showing notable year-over-year declines, a weak sign indeed. The 10-city composite index declined 2.91% as compared to March 2010 while the 20-city composite declined 3.61% over the same period. Additionally, both of the broad composite indices show significant peak... Read more →

Loan Modification and Short Sales: Changes to HAMP, HAFA, and UP.

The U.S. Treasury released updated guidance for the Home Affordable Modification Program (HAMP) this week requiring certain servicers to provide borrowers with a single point-of-contact through the entire default resolution process. The new directive applies only to the largest servicers – those with a program participation cap of $75 million or more – however Treasury says all servicers participating in HAMP are encouraged to adopt the new guidance for providing borrowers with a single point-of-contact. In addition to HAMP, the new rule also applies to the Home Affordable Foreclosure Alternatives (HAFA) program and the Home Affordable Unemployment Program (UP). However, it does not encompass second lien mortgage loans that may be eligible for the Second Lien Modification Program (2MP) under the Making Home Affordable umbrella. According to the new guidance issued, servicers must assign each borrower a dedicated “relationship manager” who is responsible for communicating and working with the borrower... Read more →

The Home Affordability Foreclosure Alternative Program, HAFA, allows eligible homeowners to complete a short sale as an alternative to foreclosure. The HAFA program provides a number of benefits for eligible sellers including $3,000 cash for relocation, full release from future liability for first mortgage debt, and pre-approved HAFA short sale terms. HAFA has 5 very specific program requirements in order to be elgible. Lenders participating in HAMP are required to offer HAFA, but the program details and implementation may differ between servicers. The HAFA short sale program should offer more attractive and predictable timelines than those found in standard non HAFA short sales. Are You Eligible for HAFA? There are 5 very specific guidelines that homeowners interested in pursuing HAFA short sale eligibility must meet. They are: The home being sold must be the primary residence. Amount owed on the first mortgage must be no more than $729,759. Current first... Read more →